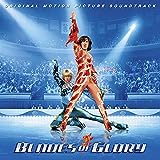 Synopsis: Way back in 2002, two of the best figure skaters in the world get stripped of their medals after a fight on the ice. Yet now, they have found a loophole in the rulebook that will let them compete as a pair. Can they put aside their differences and go for the gold once again?

Review: Blades of Glory may be a bit crude, a tad distasteful, a touch over-the-top, but it was actually funny. That is right, a comedy where laughter could actually be heard in the theater. I am not talking about that one weird guy up front, who could be heard over the hush of the rest of the crowd, laughing at all that was Norbit. It was actually the crowd that was enjoying the movie.

Will Ferrell (Talladega Nights, Anchorman) and Jon Heder (Napoleon Dynamite) play well off of each other. Ferrell is Chazz Michael Michaels, the bad boy of men’s figure skating. Heder is Jimmy MacElroy, the technically efficient robotic like skater who was raised to do nothing but win the gold. After finishing at an event in a tie, they get in a fight on the podium while accepting their gold medals. For this debacle they get suspended for life from their sport of figure skating.

When Jimmy’s stalker points out that he was only banned from men’s singles and he could still compete as a pair, he tries to get his old coach back, played by Craig T. Nelson (TV’s The District and Coach), who turns him down.

Later, while Jimmy is searching for a skating partner, he runs into Chazz and they once again get into it and cameras are there to capture it all. Jimmy’s old coach’s trained eye sees more in the moves used during the fight when it gets broadcast on the news. He gets the idea that they should make history and compete together as a team.

Now a team, their biggest competition comes from the American skating pairs champions played by Will Arnett (TV’s Arrested Development) and Amy Poehler (TV’s Saturday Night Live). They play the brother and sister team of the Stranz and Fairchild Van Waldenburg. Arnett and Poehler are part of the two most distasteful scenes in the movie. One at the end of the movie is a bit less, knowing that the two are actually married in real-life and that you knew it was coming at some point. The other, their performing as JFK and Marilyn Monroe during a skating routine, made the woman behind me groan in disgust. The scene was quite uncomfortable and less than funny. I think you will see what I mean when, or if, you see Blades of Glory.

The funniest part of the movie, as with Music and Lyrics, is the opening and how they introduce the main characters to you. In this case, with a video biographical profile narrated by sportscaster Jim Lampley. A faster paced version of something you might see about an athlete during coverage of the Winter Olympics. These are very well done and let you in on what type of comedy you are about to set through for the duration of the movie.

Also, the skating community seems to have a great sense of humor regarding their sport. Whether it was Scott Hamilton as a TV analyst with Lampley calling the action or the various cameos by skaters like Nancy Kerrigan, Dorothy Hamill, Peggy Fleming and Brian Boitano as Skating Federation Judges and Sasha Cohen cheering the guys on to victory, they sure came out to participate in this send-up of all that is figure skating. In fact, Hamilton and Lampley are great, as they have some of the best lines in the movie. They play it pretty straight, just like they were actually announcing these events for TV.

Blades of Glory is worth skating down to your local theater for a matinee. Overall, it might be worthy of a Silver medal, but given what has come thus far, comedy wise, out of Hollywood this year, it takes the Gold. Don’t worry though, as plenty of the year is left for something else to come along and knock it from atop the comedy podium.

How would your review Blades of Glory starring Will Ferrell and Jon Heder?

Previous: On The Lookout for Blades of Glory

Next: What New Movies Start the Week Before Easter?