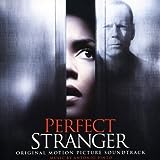 Rating: Check it Out When it Hits the Likes of HBO or Showtime –

Synopsis: When a friend is found dead, a reporter sets out to solve the case. During her investigation she comes across information that a big time advertising mogul may have something to do with it. Assuming a new identity, she gets a job at his firm. She also pursues him online via chat.

Review: Perfect Stranger is far from perfect, despite its great cast. Halle Berry (Gothika, X-Men) plays Rowena, an undercover reporter who files her stories under a pseudonym, so she can stay anonymous. Bruce Willis (16 Blocks, Die Hard) plays Harrison Hill, the boss at the top advertising firm in New York. He is married, but you wouldn’t know it from the string of women he has on the side. When one of them is found murdered, who is also a friend from Rowena’s past, she sets out to find out if he is responsible. Giovanni Ribisi (Flight of the Phoenix, Gone in 60 Seconds) plays Miles, the computer tech at the paper that helps Rowena with her stories.

The movie starts out with a quick intro to show you how great of an undercover reporter Rowena is. It all comes and goes very fast. You know right away what is going to happen, because you have seen it before. Maybe that is why they rushed through it so hastily.

When the story Rowena and Miles have been working on for months gets quashed by the uppity-ups at her paper, another case of the powerful protecting the powerful, she quits. On her way home she runs into the old friend from her childhood who wants her to take a look at Harrison, who she has been with and now he is blowing her off. Next, we learn of the woman’s death.

In true suspense thriller style they throw out a lot of possible suspects for the murder of Rowena’s friend. There is Harrison, his wife, his assistant, Miles, Rowena’s ex who had a thing with the friend in the past. Who could of done it? Well, when you find out, you may be surprised in a, “I knew it,” kind of way. Mostly because, once the person who is most likely responsible is arrested, you know there is another twist coming and the list of truly likely candidates has been paired way down.

I will give them credit for one thing; all the clues are there for you to see throughout the movie. Not all overly obvious. They even give you a nice recap of what you should have seen that points to the person who did it, in case you missed them along the way.

What is most sad about Perfect Stranger is the lack of quality acting by a group of quality actors. Not to say that the material they had to work with was the best or most original, it wasn’t, but you felt they could have done more with it. Some scenes are over-the-top, while others are underwhelming in everyway. You might say at times that they were just going through the motions without much in the way of any emotions.

Don’t be fooled by the pretty face, this Stranger should be left stranded. You might give it a look-see once it hits one of the cable movie outlets, otherwise don’t bother. What did you think of Perfect Stranger? Leave your movie review in the comments.

Previous: The Pathfinder Sets a Course to Disturbia with a Perfect Stranger

Next: What New Movies Come Out Friday, April 20th?