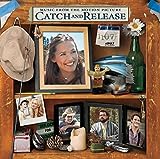 Synopsis: Gray (Jennifer Garner) finds life after the death of her fiance to be tough as she finds out secrets he had kept from her. Her fiance’s best friend (Timothy Olyphant) and another goofball of a friend (Kevin Smith) help her along the way.

Review: Catch and Release is like being handed a Happy Meal in the midst of eating a meal of bean curd loaf and lawn clippings. That is to say, it’s a good thing and quite enjoyable. This story of love, loss, betrayal and finding one’s self while finding love again holds your interest and keeps you engaged with an appealing cast of characters, even with its meandering pace.

It starts you out right smack dab in the middle of Gray’s fiance’s funeral. Those who have gathered are trying their best to console her while at the same time a man shows up to deliver flowers for the wedding that is no longer. It is a very poignant scene and the movie takes off from there, oscillating between the comedy and the drama. Never giving you too much of one with out dishing out some of the other. While the trailer did seem to play up the comedic aspects a bit more than the dramatic, it wasn’t so much that you will be disappointed by the amount of comedy in the movie.

Kevin Smith, who is best known acting wise for Silent Bob from the likes of Mallrats

, provides most of the comedy as Sam, a long time friend of the fiance. His timely quotes from various food packaging and adventures in the kitchen, breaks the tension and gets you ready for the next dose of drama. For someone who says he isn’t a good actor, he is very good in this role, although he may just be playing a version of himself, as they do dress a lot alike.

Timothy Olyphant plays Fritz, the former best friend of the fiance. He is a hotshot commercial director in L.A. and not one of Gray’s favorite people. Over the course of the movie, as events transpire, these two become close and eventually fall for each other. This is where the movie turns into your regular romantic movie, which has the good girl falling for the seemingly bad boy and vice versa.

Catch and Release is worth catching at a matinee and guys, if you get drug to this by your girlfriend or wife; there’s plenty of comic relief to get you through.

Have you seen Catch and Release? How good or bad did you think it was?

Previous: So, What New Release Will I Catch This Week?

Next: Romantic Comedy vs. Suspenseful Horror to Begin February