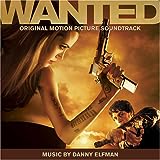 Rating: Worth a Matinee

Synopsis: A young man coasting through life in obscurity comes to find that he is one of a few with special abilities. He is told that his father, who left just after he was born, was one of the greatest assassins to ever live. A group calling themselves The Fraternity wants to recruit him to take revenge on the man that killed his father. He begins training to learn how to use his dormant abilities. The group lives by an unbreakable code that has been handed down for a thousand years. The young man starts to enjoy his new power, but comes to learn that the group he is working for might not be all that it is cracked up to be. He comes to the realization that only he can truly control his destiny.

Review: Wanted has all the action you can ask for from a big budget summer movie, it just could of used a better story. The movie is based on the Wanted graphic novel

, which was written by Mark Millar with art by J.G. Jones. Yet, from what I understand, the extremely dark and amoral nature of the comic has been altered to reach a more mainstream audience.

While there’s not much story involved here, and what little there is, is actually kind of lame, the theme of the movie is a good one. You can and should choose your destiny. Don’t just muddle through life, get off you ass and do something. Stop wasting your talents and pursue something that you want to do. It just tells you that while bullets fly and things blowup.

James McAvoy (Atonement) plays Wesley Gibson, a nobody whose name doesn’t even register any results in Google. He works in a dead end job that he hates and has a best friend and girlfriend that are seeing each other behind his back. He knows all of this is happening, but just continues to coast through life in obscurity doing nothing about it. His transformation from office drone to badass assassin is quite a trip. The best scene is when he tells off his annoyingly bitchy boss and then cracks his best friend upside the head with his ergonomic keyboard and the keys spell “F**K YOU” as they go flying through the air.

Angelina Jolie (Mr. & Mrs. Smith) is the perfect person to play Fox, the female assassin that recruits Wesley into the Fraternity. You can’t imagine anyone else lying across the hood of a car and steering with her feet, while shooting at a guy following behind. She does really well with her one small scene of character development, as well. Other than that, Fox is all about exuding a wicked coolness, which Jolie pulls off very well.

Timur Bekmambetov (Night Watch) directs and gives the movie a frantic pace. From the opening car chase to the closing gun battle, the movie barely stops to breathe. Yet, this and the special f/x is why you are going to see Wanted. It is something to behold on the big screen.

Unfortunately, Wanted falls into the ranks of 300, an almost great movie that spends the vast majority of its time creating cool special f/x fight scenes and battles and spending little on everything else. It’s worth a matinee, mainly because this type of movie should be seen at a theater, whether it has a story or not.

Next: What New Movies Start the Week of the Fourth of July?